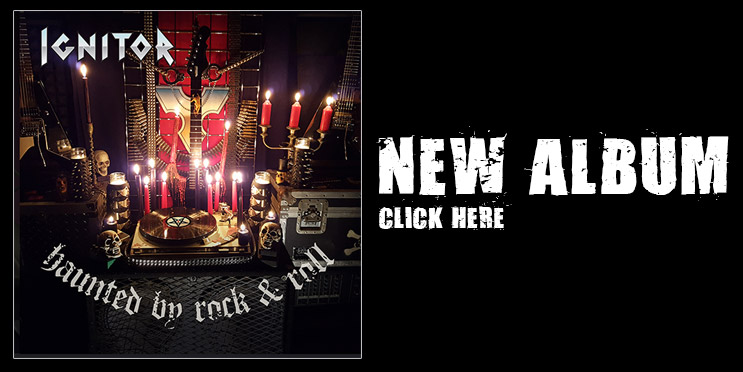 Says Green, “The first concert I ever went to was DANGEROUS TOYS when they performed at Boston’s Orpheum Theater back in 1989. From that moment on Jason McMaster played a pivotal role in my life musically and I’ve followed everything he’s ever done since. Almost 30 years later, to be putting out IGNITOR’s Haunted By Rock & Roll through my own sublabel ArieScope Records, with EMP LABEL GROUP, and for the band to have written the song “Hatchet” (The Ballad Of Victor Crowley)” specifically for the latest entry in my HATCHET slasher film franchise, is truly a dream come true. IGNITOR represents everything that made me fall in love with metal to begin with.”

McMaster adds, “I met Adam because he was a huge TOYS fan. We started sending tweets back and forth on Twitter, and I honestly had no idea who he was at the time. Eventually, he flew down for a DANGEROUS TOYS show in San Antonio. He didn’t bug me for passes, I didn’t even meet him that night, he just came down, watched the show and left, which was really cool. I did give him a shout-out from the stage that night, and he was super excited about it. So we became friends and, eventually I realized who he was. We started talking more, emailing etc, and he told me how much he loved “Demon Bell”, and the SHOCKER soundtrack, and he asked if I would do a song for one of his movies. So I wrote “Hatchet (The Ballad Of Victory Crowley)”, a suggested song title from one of his writing partner, as a nod to “Demon Bell (The Ballad Of Horace Pinker)”. It’s a killer song, and a really cool story. Thom (Hazaert) from EMP, directed a short film documentary about the SHOCKER soundtrack a few years ago for SCREAM FACTORY, that I took part in, with David (Ellefson), as well, so it’s really cool how all these things come around full circle.”

After releasing Road Of Bones in 2005, and the departure of vocalist Erika Tandy, IGNITORsoldiered on, writing and recording their next full-length release, The Spider Queen, while searching far and wide for a new vocalist. Enter Texas metal legend Jason McMaster of WATCHTOWER and DANGEROUS TOYS, who offered to lend his legendary vocal talents to the new album. And just like that, IGNITOR was back in business.